Other tracks from this series of experimental electronic pieces:

Torse is a project of danceable electronics in collaboration with other musicians.  This excerpt of a live show from May 2019 features the dynamic polyrhythms of drummers John Neikrasz and Jacob Mitas.

My original sound score for this dance piece reflected the wildly divergent approaches in the two halves (or “worlds”).  In the first, sonic fragments were culled from a long list of movie scenes, old television commercials, YouTube videos, pop songs, nursery rhymes etc., gathered by the dancers.  These short bursts of micro-edited media were synced to precise cues – shards of not-quite recognizable sonic detritus colliding with elaborate onstage recitations.

END_OF_DOCUMENT_TOKEN_TO_BE_REPLACED

This experimental, interactive theater piece was created by the cast, based on dozens of interviews with current and former residents of communes in the Pacific NW.  My sound score used only the sounds of the human voice – from chanting, singing and toning to whispering, hissing and glossolalia.  Vocal recordings were sampled, looped, filtered and processed to create a wide range of textures, from shimmering drones to New Age melodies, occasionally merging with the voices of the actors.  Tones emerged from a glowing “sound box” in the middle of the performance area and expanded out to fill the room on a four-channel system.

I accompanied Bill Will’s exhibition of kinetic sculptures Fun House with a four-channel generative sound installation.  An extensive library of individual sound events were randomly triggered and spatialized throughout the gallery in ever-changing combinations and layers.  Sound events ranged in length from a few seconds to several minutes and were derived from the sound of a single snare drum hit – from quiet buzzing and drones to rumbles and pops.  Sudden bursts of sound emerged from silences.  As visitors activated the noisy sculptures, the installation provided a parallel sonic environment. 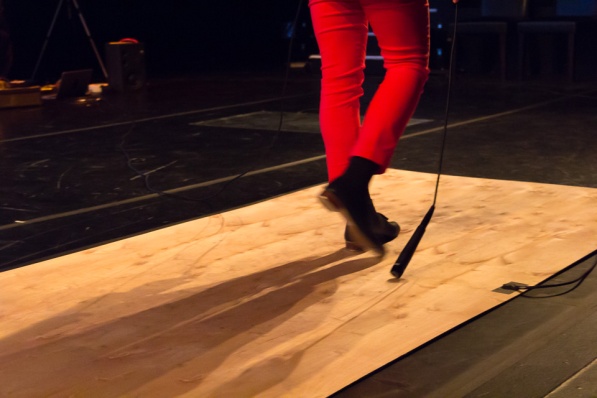 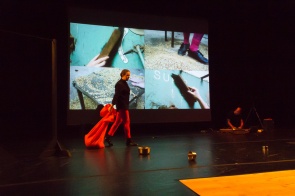 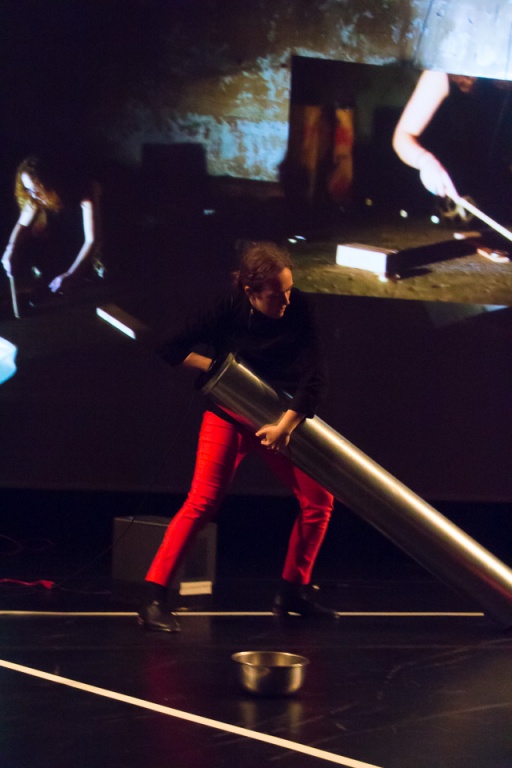 END_OF_DOCUMENT_TOKEN_TO_BE_REPLACED

My sound design for this theatrical reimagining of Gus VanSant’s “My Own Private Idaho” combined remixes of original music by Peter Holmstrom (Dandy Warhols) with layered environmental and atmospheric sound.  Scenes in present time were joined by soft tones coming from hidden onstage speakers.  As characters slipped into the past, remembered spaces emerged from a four-speaker system surrounding the audience. Microphones suspended above the stage added reverb effects to the actor’s voices at key moments.

END_OF_DOCUMENT_TOKEN_TO_BE_REPLACED

This music video for my track, Stint, was a collaboration with sculptor and photographer Harrison Higgs.

My sound design for Kelly Rauer’s three-channel video installation concentrated on swooping, twirling motions.  White noise, sine tones and pulsing drum machines were recorded with a swinging microphone – a pendulum to mimic the kinetics of the camera work and the dancer’s bodies.  Paired and mirrored, larger than life, dancers swing the graphic marks of their limbs in the stark glare of a spotlight or fling themselves into a dark void, amid passing tones and the crackling of an ice storm.

END_OF_DOCUMENT_TOKEN_TO_BE_REPLACED

My camerawork and sound design for this installation captured Rauer leaping, jumping and crawling through the empty space of a blank, sunlit studio.  Four video projections were arranged throughout the gallery along with four televisions of various sizes.  Viewers were surrounded by stuttering sequences and asynchronous rhythmic gestures, unable to see all screens at once – or any screen in isolation.    From rafter-mounted speakers emerged closely-miked recordings of separate but similar movements, mixing with the small scattered synchronous sounds on television monitors.  The gallery space was filled with creaky footsteps, bodily thuds and breathing.